‘Abdu’l‑Bahá, the Head of the Bahá’í Faith after the passing of Bahá’u’lláh.

Throughout His ministry which lasted 29 years, ‘Abdu’l-Bahá laboured to spread the Bahá’í Faith to every part of the world and fostered the development of the administrative institutions ordained by Bahá’u’lláh.

Expansion and Consolidation of the Bahá’í Community

Under the guidance of ‘Abdu’l-Bahá, a network of Spiritual Assemblies evolved in Iran that managed the affairs of the Bahá’í community, promoted the moral development of its members, organized schools with particular concern for the education of girls, provided for the sick, and engaged in the promotion of the Bahá’í teachings.

‘Abdu’l-Bahá placed great emphasis on the advancement of women, who began to play their role in community activities, ultimately attaining equality with men as members of Spiritual Assemblies, both local and national, who were elected from among the body of believers in Iran.

‘Abdu’l-Bahá also directed the spread of the Bahá’í Faith in the Caucasus and Russian Central Asia, where Ashkhabad with its Bahá’í House of Worship, schools, and publications, unhampered by government restrictions, became a model Bahá’í community.

Egypt, which greatly benefitted from ‘Abdu’l-Bahá’s sojourn in that country, also witnessed the growth of a Bahá’í community that included people of both Muslim and Coptic backgrounds as well as Iranians, Kurds, and Armenians. In Turkey, Ottoman Iraq, Tunisia, and even in distant China and Japan, Bahá’í communities sprang up or were strengthened under ‘Abdu’l-Bahá’s leadership.

Growth in the West 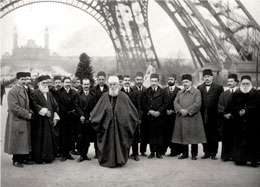 ‘Abdu’l-Bahá and His travel companions beneath the Eiffel Tower in Paris, in 1912.

A significant development for the future of the Bahá’í Faith immediately following the passing of Bahá’u’lláh was its spread to North America. It was initially established there through the efforts of a Syrian Bahá’í of Christian origin. ‘Abdu’l-Bahá paid particular attention to the development of the believers and Bahá’í institutions in the United States and Canada and entrusted to the Bahá’ís of North America the task of carrying the teachings of Bahá’u’lláh to most of the rest of the world. From 1898 onwards, there was a flow of American and European pilgrims visiting ‘Akká to meet ‘Abdu’l-Bahá, Who encouraged them in their teaching efforts. In the last years of His ministry, at His urging and in response to His Tablets of the Divine Plan, Bahá’ís first reached South America and Australia.

Its Western expansion released the Bahá’í Faith from the predominantly Muslim milieu in which it had initially grown. ‘Abdu’l-Bahá played a major role in introducing the Bahá’í teachings to a Christian audience. Important in this regard was a collection of His talks to Western pilgrims, Some Answered Questions, in which He dealt with religious and philosophical themes.

‘Abdu’l-Bahá’s journeys to Egypt, Europe and North America firmly established knowledge and appreciation of the Bahá’í Faith in the West. Not only did they allow the Bahá’ís in those countries direct contact with the Person of ‘Abdu'l-Bahá, but they introduced Bahá’u’lláh’s teachings to a wide range of people who would not otherwise have heard of them. ‘Abdu’l-Bahá’s numerous public addresses to universities, churches, synagogues, mosques, and philanthropic societies had the effect of gaining a large number of new admirers and adherents for the religion. ‘Abdu’l-Bahá’s talks were to form the basis of the standard presentation of the Bahá’í teachings, especially the social teachings, for many decades after. ‘Abdu’l-Bahá’s laying, with His own hands, the cornerstone of the first Bahá’í House of Worship in the West, near to Chicago, also marked the inauguration of Bahá’í institutions in North America. 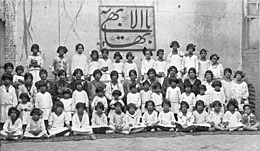 An early Baha’i contribution to girls’ education in Iran.

The most pressing problem for ‘Abdu’l-Bahá during the years immediately following the passing of Bahá’u’lláh was the sustained opposition of His half-brother, Mirza Muhammad ‘Ali. Spurred by uncontrollable jealousy, He falsely accused ‘Abdu’l-Bahá of claiming for Himself a station equal to Bahá’u’lláh, of usurping the rights of Bahá’u’lláh’s other offspring, and of stirring up sedition against the civil authorities. Muhammad ‘Ali’s activities culminated in a period of renewal of the strict incarceration of ‘Abdu’l-Bahá within the walls of ‘Akká from 1901 to 1909. Muhammad ‘Ali was able to influence a number of the Bahá’ís living in the Haifa-‘Akká area as well as the man who had taken the Faith to America. All but a small handful of members of the worldwide Bahá’í community, however, remained faithful to ‘Abdu’l-Bahá. 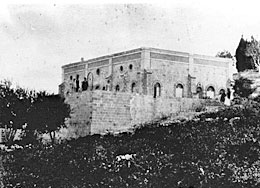 The original Shrine of the Báb, as built by ‘Abdu’l-Bahá.

Other events of importance during ‘Abdu’l-Bahá’s ministry were: the transfer of the remains of the Báb from Iran to ‘Akká and their entombment in a Shrine on Mount Carmel; the writing by ‘Abdu’l-Bahá of the Tablets of the Divine Plan, which were to become the framework for the spread of the Bahá’í Faith; the first steps in the building up of the modern administrative institutions of the Bahá’í Faith in both the East and West; the measures taken by the Bahá’í community of Ashkhabad in Russian Turkestan to develop many aspects of Bahá'í community life, culminating in the erection of a House of Worship; the initiation of construction of a House of Worship in North America; the activities of the renowned Bahá’í scholar Mirza Abu’l-Fadl Gulpaygani in teaching the Bahá’í Faith at the University of al-Azhar in Cairo, the foremost place of learning in the Islamic world; and the extensive international travels of a small number of Bahá’ís, which helped to create the beginnings of a worldwide religious movement.

By the time of ‘Abdu’l-Bahá’s passing, the Bahá’í Faith had spread to some 35 countries.