High on the list of priorities of any religious system must be the determination of the canon of its scripture and the application of these sacred writings to the circumstances of individual and community life. Empowered by ‘Abdu’l-Bahá to be the sole authoritative interpreter of the Bahá’í Writings, Shoghi Effendi read world events in the light of the Bahá’í scriptures and shared with the Bahá’í community the results of these analyses in the form of letters. His role as interpreter of the sacred texts was of immeasurable importance to the development of the Bahá’í Faith, assuring to this day a unity of understanding that has protected the community from division.

At the same time, nascent Bahá’í institutions around the world were deluging the Guardian with questions on an enormous range of subjects, and his answers to these inquiries also formed a significant portion of his interpretation of Bahá’u’lláh’s Revelation.

In some 26,000 letters and thousands of cables, Shoghi Effendi offered guidance, inspiration and encouragement to individuals, groups and Bahá’í institutions. 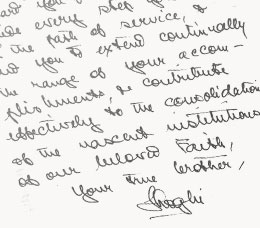 The Guardian often signed his letters “Your true brother, Shoghi”

Around half of these letters were composed in Persian and Arabic. Among countless themes and concepts, Shoghi Effendi clarified, in exquisitely beautiful and powerful language, the laws and fundamental verities of the Faith; outlined the salient features of the responsibilities of the Universal House of Justice; set out the steps to be taken for the election and functioning of local and national Assemblies; and spelled out the obligations of individual Bahá’ís.

Among his letters, a few ran to the length of an entire book. Several volumes have been compiled of the most important of his letters and messages. Seven written between 1929 and 1936 were collected under the title The World Order of Bahá’u’lláh. In them, the Guardian clarified the doctrinal verities at the core of the Bahá’í Faith, explored its mission in the world, explained the true stations of its Central Figures, and presented the structure and mandates of Bahá’í institutions.

Another letter of Shoghi Effendi, published under the title, The Advent of Divine Justice (25 December 1938), called the Bahá’ís to a consistency of belief and language, and the rectitude of conduct necessary, to execute the tasks that lay ahead of it. Three years later, as conflict gripped the world, a letter published as The Promised Day Is Come (28 March 1941), reassured the Bahá’ís of the genesis, direction and necessity of the “titanic upheaval” humanity was experiencing. 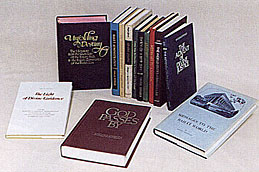 In the early 1940s Shoghi Effendi focused attention on the events of Bahá’í history and, in 1944, in commemoration of the centenary of the declaration of the Báb, he released God Passes By, his highly detailed study covering the entire century, from the Báb’s first announcement of His mission to the completion of the first “Seven Year Plan”.

Simultaneous to this, Shoghi Effendi penned a parallel work in Persian which similarly reviewed the history of the Bahá’í Faith and expounded on the features of the World Order enshrined in Bahá’u’lláh’s Writings.

Shoghi Effendi served as the principal translator of the Bahá’í Writings. He had studied English from his early childhood and, as a young man, was able to continue his studies at the American University of Beirut and subsequently at Oxford University, where he remained until the time of ‘Abdu’l-Bahá’s passing in 1921. Since the major administrative bodies of the Faith during the first critical decades of the Guardianship were located in English-speaking countries, Shoghi Effendi’s ability to express and interpret Bahá’í concepts in English provided an invaluable source of guidance to the Faith’s new followers in the Western World.

The Guardian’s superlative command of language and meticulous choice of words set the standard for all Bahá’í translations to follow. He rendered major works of Bahá’u’lláh into English—such as The Hidden Words (1929), The Kitáb-i-Íqan (1931) and the Epistle to the Son of the Wolf (1941)—and organized extracts from them and other essential passages into the anthologies, Gleanings from the Writings of Bahá’u’lláh (1935) and Prayers and Meditations of Bahá’u’lláh (1938). He translated countless other prayers and passages from Bahá’u’lláh, the Báb and ‘Abdu’l-Bahá and included them within his own letters. Shoghi Effendi also recreated in English an authentic account of the Faith’s early history, known as The Dawn-Breakers (1932).