Bahá’í efforts of social action seek to promote the social and material well-being of people of all walks of life, whatever their beliefs or background. Such efforts are motivated by the desire to serve humanity and contribute to constructive social change. Together they represent a growing process of learning concerned with the application of the teachings of Bahá’u’lláh, along with knowledge accumulated in different fields of human endeavour, to social reality.

Issues of social and economic development can be complex, and the efforts of Bahá’ís to engage in social action are, by comparison, modest. They are usually carried out by small groups of individuals in a locality where the courses of the training institute are being widely offered. Efforts emerge out of growing collective consciousness. Most are projects of a fixed duration. They come to a close when their objectives have been met. They may be related to any one of a variety of fields, for example, health, sanitation, education, agriculture or environmental protection. Whatever their nature, they aim at improving some aspect of the life of the local population. In a few cases, those engaged in grassroots social action are able to extend the range of their activities in an organic fashion, and their efforts evolve into projects of a more sustained nature, with administrative structure.

In such cases, a non-profit, non-governmental organization may be established by a group of Bahá’ís, often with like-minded colleagues, to address one or another issue of social and economic development. Operating on the principles of the Bahá’í Faith, it is generally called a “Bahá’í-inspired organization”. It provides institutional capacity in a country or region to deal with the generation, application and diffusion of knowledge about development. Typically, such an organization will begin with one primary line of action and will allow its efforts to increase in complexity over time. 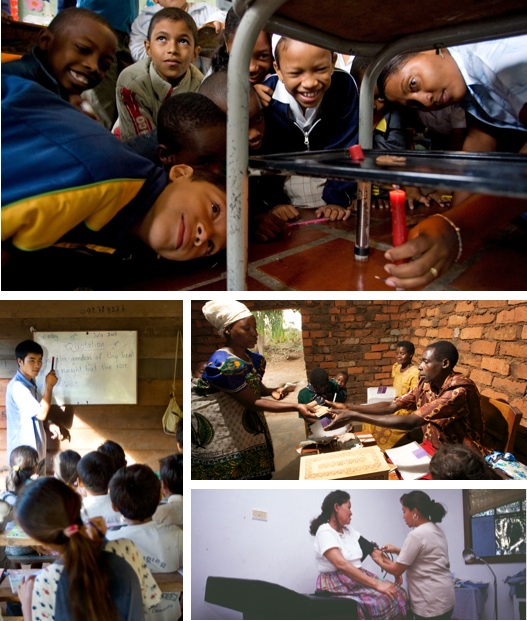 For communities in most regions, one of the first concerns is to ensure that their children and youth have access to a sound academic education. Currently, there are a few Bahá’í-inspired organizations that have devised well-defined programmes, particularly in the field of education, and members of local communities all over the world can, with ongoing training in the use of materials, adopt their methods and approaches. Many capable young men and women, who might otherwise be forced to leave their villages and neighbourhoods in search of employment, benefit in particular. To the capacity they have developed through the study of institute courses are added new knowledge and skills. And they become the catalysts for further progress: capacity rises within the community, if only moderately, to take collective action in fields such as education, health and food production and to resist the influence of destructive forces tearing at the social fabric.

In this environment, the local governing council or Local Spiritual Assembly serves as the voice of moral authority. It interacts with social and political structures in the locality, consulting with them about the work Bahá’ís are doing for the progress of the village or neighbourhood. It also makes certain that, as small groups strive to improve local conditions, the integrity of their endeavours is not compromised. Overly ambitious projects that would consume energies and ultimately arrest progress are avoided. Efforts grow in keeping with the capacity of the local population to carry them forward. Sustainability is a natural consequence of the process itself.

For Bahá’ís, social action is pursued with the conviction that every population should be able to trace the path of its own progress. Social change is not a project that one group of people carries out for the benefit of another.