The Life and Work of Shoghi Effendi

For 36 years—from 1921 until his passing in 1957—Shoghi Effendi immersed himself completely in the work he had been appointed to shoulder as Guardian of the Bahá’í Faith. His guiding hand directed the evolution and growth of the Bahá’í community throughout the world at a critical stage in its development.

Shoghi Effendi as a child.

Related to both the Báb and Bahá’u’lláh, Shoghi Effendi was born in ‘Akká while his Grandfather, ‘Abdu’l-Bahá, was still a prisoner. From his earliest years, a staunchness of faith coupled with a deep devotion to his Grandfather motivated Shoghi Effendi’s every action. He wished to master the English language so that he could serve as a secretary and translator for ‘Abdu’l-Bahá, and so, in the spring of 1920, he left for Oxford University where he further developed his impressive command of English.

When ‘Abdu’l-Bahá passed away in November 1921, Shoghi Effendi was devastated. In a state of profound grief, he learned that ‘Abdu’l-Bahá in His Will and Testament had appointed him the Guardian of the Bahá’í Faith.

Despite his personal distress, Shoghi Effendi vigorously assumed his daunting responsibilities. He set out to execute the provisions of what he identified as three “charters” of the Bahá’í Faith: Bahá’u’lláh’s Tablet of Carmel, establishing the mandate for the development of the Bahá’í World Centre in the Holy Land; The Will and Testament of ‘Abdu’l-Bahá, outlining the framework for the evolution of the Bahá’í administration; and ‘Abdu’l-Bahá’s Tablets of the Divine Plan, providing the guidelines for the global expansion of the Bahá’í community.

With the passing of ‘Abdu’l-Bahá, the Bahá’í Faith entered a new stage in its growth. What Shoghi Effendi described as its “apostolic era” or “heroic age” had passed, and its “formative age” had begun. His own position as Guardian involved a function and style of leadership quite different from that of ‘Abdu’l-Bahá.

In 1937, Shoghi Effendi married Mary Maxwell from Montreal, Canada, who became known to Bahá’ís by the title Amatu’l-Bahá Ruhiyyih Khanum. Years later, in a message to the National Spiritual Assembly of the Bahá’ís of Canada, the Guardian described her as “my helpmate, my shield…and my tireless collaborator in the arduous tasks I shoulder.”

The development of Bahá’u’lláh’s administrative order was a major focus of Shoghi Effendi’s attention. As the Bahá’í institutions evolved, they would mobilize the community’s human and material resources, providing the necessary instruments for the implementation of the Divine Plan. First, a structure of elected local and national Bahá’í institutions was required to administer the affairs of the growing community. Shoghi Effendi guided these nascent institutions to carry out a wide range of essential activities, such as promoting the teachings, publishing literature, and organizing community life—all the while learning how to practice the method of consultative decision making prescribed by Bahá’u’lláh.

In 1937, 16 years after the passing of ‘Abdu’l-Bahá, the administrative capacity in a number of countries had developed sufficiently that Shoghi Effendi could begin implementing plans to diffuse the Bahá’í teachings further afield and establish communities throughout the entire planet, in fulfilment of the objectives laid out in the Tablets of the Divine Plan.

To spearhead and support this work, the Guardian began appointing the “Hands of the Cause of God”, a corps of outstanding Bahá’ís on every continent, whom he later designated as the “Chief Stewards of Bahá’u’lláh’s embryonic World Commonwealth”. The function of this body of high-ranking believers was to lead initiatives in promoting the Bahá’í teachings, encourage learning, assist and educate the Assemblies in their duties, and provide moral leadership and encouragement. In 1951, Shoghi Effendi appointed the members of an International Bahá’í Council, which he described as the forerunner to the Universal House of Justice. In 1954, a global network of Auxiliary Board members to assist the Hands of the Cause was also formed.

Expansion of the Bahá’í Community

In order to realize the aims of ‘Abdu’l-Bahá’s Divine Plan—to establish the Bahá’í Faith in every land—the Guardian initially encouraged and assisted what was then a relatively small band of Bahá’ís to spread out across the planet. A few arose immediately. Foremost among them was an American journalist, Martha Root, who traversed the globe at least four times and shared the Bahá’í message with countless souls, among them Queen Marie of Romania—the first royal personage to embrace the teachings. Shoghi Effendi maintained regular correspondence with Martha Root and the numerous other intrepid individuals who left their homes to spread the Faith.

Shoghi Effendi as a young man.

As the number of Bahá’ís—and their capacity to act—increased, Shoghi Effendi systematically set about putting ‘Abdu’l-Bahá’s plan (as set out in the Tablets of the Divine Plan) into effect, giving a series of specific plans to a number of national Bahá’í communities to spread the Faith further afield. By 1953, the Bahá’ís were able to embark upon what he described as a “fate-laden, soul-stirring, decade-long, world-embracing Spiritual Crusade”. Through this campaign, the Bahá’ís throughout the world achieved astonishing results. When ‘Abdu’l-Bahá had passed away, some 35 countries were already opened to the Bahá’í Faith with a few having rudimentary organization at the national level. By the time of Shoghi Effendi’s passing in 1957, Bahá’ís resided in 219 new sovereign states, dependencies and major islands. By 1963, there were 56 nationally elected governing councils—known as National Spiritual Assemblies—as well as more than 4,500 Local Spiritual Assemblies, and Bahá’ís in more than 15,000 localities. 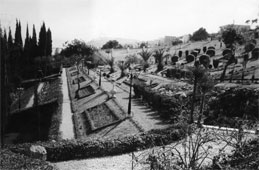 During his ministry, Shoghi Effendi began to construct in the Holy Land the heart and nerve-centre of a world-embracing Faith, overcoming what often seemed to be insurmountable material obstacles.

Among the many tasks he shouldered in this regard, one was particularly weighty—to safeguard the Shrine of Bahá’u’lláh and the buildings and land adjoining it. Securing the entirety of the property, and beautifying its environs, was a task that occupied him until the end of his life.

In Haifa, he oversaw the construction of the superstructure for the Shrine of the Báb on Mount Carmel, which with its golden dome became known as the “Queen of Carmel”. He also laid out magnificent gardens around both Shrines and acquired, restored and beautified many other sites associated with Bahá’í history, including the surroundings of the resting places of the sister, brother, mother, and wife of ‘Abdu’l-Bahá.

To establish facilities for the world administrative centre of the Faith on Mount Carmel, Shoghi Effendi mapped out an “arc” on the mountainside, around which buildings housing the international institutions of the Bahá’í Faith would be situated. The first of these, the International Archives Building, was completed shortly before his passing.

Throughout Shoghi Effendi’s ministry, he guided the Bahá’í community through numerous challenges: the German Bahá’ís were persecuted under Nazi rule; a number of Bahá’ís were arrested and interrogated in Turkey; the highly-developed community in ‘Ishqábád—following sustained persecution by the Soviet authorities in the 1920s and 1930s—was dispersed; further opposition to the Faith broke out in Iran; the house of Bahá’u’lláh in Baghdad was seized and could not be regained. 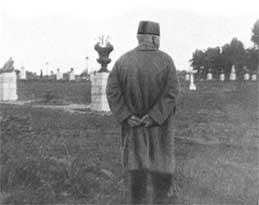 With characteristic calm and perception, Shoghi Effendi saw the potential for triumph in every apparent crisis facing the Bahá’ís. For example, in Egypt the courts delivered a series of judgments which, while on the surface appeared to be adverse, were hailed by Shoghi Effendi as recognition of the independent nature of the Bahá’í Faith. While assisting the community to take action in national courts and on the international stage to defend their basic human rights, he also taught them to see difficulties as opportunities to carry forward the work of the Faith.

The Passing of Shoghi Effendi

Despite carrying the enormous burden of duties and responsibilities, the Guardian devoted whatever time he could spare to greeting pilgrims visiting the Holy Land from both East and West. He met with them, encouraged and advised them, and shared news of the progress of the community worldwide.

In November 1957—while he was visiting London for the purpose of purchasing furniture and ornaments for the buildings and gardens of the Bahá’í World Centre—Shoghi Effendi passed away suddenly at the age of 60. The Bahá’ís of the world were left in a state of profound grief. His final resting place is in the New Southgate Cemetery in north London. Today, it is a place of prayer and reflection for visitors from all over the world.