The Shrine of the Báb on Mount Carmel in Haifa, Israel — one of the holiest places in the world for Bahá’ís.

The Báb – Herald of the Bahá’í Faith

The Shrine of the Báb

During the darkest nights of His incarceration, bereft of contact with His devoted followers, the Báb was refused even a lamp by His captors. Today, however, hundreds of thousands of visitors a year are able to view the luminous Shrine that encloses His earthly remains. Bathed in light, each and every night, the Shrine of the Báb is a singular point of attraction on Mount Carmel in the Holy Land. The building’s location and harmonious blend of Eastern and Western architectural styles have made it a familiar and well-loved landmark on the Mediterranean coast.

Follow the building of the Shrine of the Báb through this collection of images.

It was in the summer of 1891 that Bahá’u’lláh stood by a circle of cypress trees halfway up the barren north slope of Mount Carmel and pointed out to His son, ‘Abdu’l-Bahá, the spot where a befitting mausoleum should be erected to receive the remains of the Báb. ‘Abdu’l-Bahá set about the arduous task of purchasing the land and erecting a modest, six-roomed mausoleum. “Every stone of that building, every stone of the road leading to it, I have with infinite tears and at tremendous cost, raised and placed in position,” ‘Abdu’l-Bahá is recorded as having remarked. He envisaged that a Shrine would eventually be “constructed in the most exquisite fashion and will appear with the utmost beauty and magnificence. Terraces will be built from the bottom of the mountain to the top. Nine terraces from the bottom to the Shrine and nine terraces from the Shrine to the summit. Gardens with colourful flowers will be laid down on all these terraces.”

On 21 March 1909, the remains of the Báb—hidden for six decades following His execution and secretly transported from Iran to the Holy Land—were finally laid to rest. ‘Abdu’l-Bahá’s grandson Shoghi Effendi wrote, “When all was finished, and the earthly remains of the Martyr-Prophet of Shiraz were, at long last, safely deposited for their everlasting rest in the bosom of God’s holy mountain, ‘Abdu’l-Bahá, Who had cast aside His turban, removed His shoes and thrown off His cloak, bent low over the still open sarcophagus, His silver hair waving about His head and His face transfigured and luminous, rested His forehead on the border of the wooden casket, and, sobbing aloud, wept with such a weeping that all those who were present wept with Him. That night He could not sleep, so overwhelmed was He with emotion.”

Soon after ‘Abdu’l-Bahá’s passing, Shoghi Effendi personally supervised the addition of three rooms to the original building, converting it into a symmetrical square with nine rooms. In the early 1940s, the distinguished Canadian architect, William Sutherland Maxwell, designed a superstructure for the Shrine. Despite the impact of the Second World War and the turmoil sweeping the region, construction was completed in October 1953, inspiring Shoghi Effendi to describe the Shrine as the “Queen of Carmel enthroned on God’s Mountain, crowned in glowing gold, robed in shimmering white, girdled in emerald green, enchanting every eye from air, sea, plain and hill.” 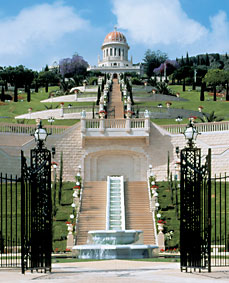 The Shrine of the Báb with its spectacular garden terraces.

The decision made by the Universal House of Justice in 1987 to complete the terraces as envisaged by ‘Abdu’l-Bahá galvanized the Bahá’ís of the world. Financial donations flowed in from every part of the planet. Every sum—no matter how small or large—was offered voluntarily by members of the Bahá’í community in a spirit of devotion and generosity, with the desire to make some contribution to the beautification of this well-loved, sacred spot. In 1990, development commenced on the construction of the 19 terraces, which were inaugurated 11 years later.

In the years since these terraces opened, more than ten million people have visited them and the surrounding gardens. In 2008, the Shrine of the Báb—along with the Shrine of Bahá’u’lláh near ‘Akká—was added to the UNESCO World Heritage list in recognition of its “outstanding universal value” to the common heritage of humanity.

“The beauty and magnificence of the Gardens and Terraces,” wrote the Universal House of Justice, “are symbolic of the transformation which is destined to occur both within the hearts of the world’s people and in the physical environment of the planet.”

It was for this vision of transformation that the Báb and tens of thousands of His followers gave their lives.