The institution of the Mashriqu’l-Adhkár, translated as “The Dawning Place of the Mention of God”, was ordained by Bahá’u’lláh Himself. It is a pivotal concept of Bahá’í community life, giving concrete expression to the unity of devotion and service.

Build ye houses of worship throughout the lands in the name of Him Who is the Lord of all religions…Then, with radiance and joy, celebrate therein the praise of your Lord, the Most Compassionate.

Bahá’ís in localities throughout the world are today planting seeds from which Mashriqu’l-Adhkárs will eventually grow. The process begins with simple efforts to open personal and collective spaces for prayer. Acts of service then become integrated into an evolving pattern of activity and more sustained efforts to infuse aspects of community life with a devotional spirit become possible. The eventual establishment of a physical edifice marks another important stage in the fulfilment of Bahá’u’lláh’s vision for Houses of Worship.

The physical structure of a Mashriqu’l-Adhkár comprises a central building—a House of Worship—along with several dependencies. While the Mashriqu’l-Adhkár forms the focal point of worship in a geographical area, its purpose is not solely to provide a place for prayer. ‘Abdu’l-Bahá explained that, through the provision of education, healthcare and other services it is also to support the social and economic progress of the community and afford shelter, relief and assistance to those in need. In this connection, ‘Abdu’l-Bahá anticipated that subsidiary branches—such as a hospital, school, university, dispensary, and hospice—would gradually be added to a House of Worship.

Referring to the Mashriqu’l-Adhkár then being constructed near Chicago in the United States, Shoghi Effendi wrote that:

“…however inspiring the conception of Bahá’í worship, as witnessed in the central Edifice of this exalted Temple, it cannot be regarded as the sole, nor even the essential, factor in the part which the Mashriqu’l-Adhkár, as designed by Bahá’u’lláh, is destined to play in the organic life of the Bahá’í community. Divorced from the social, humanitarian, educational and scientific pursuits centering around the Dependencies of the Mashriqu’l-Adhkár, Bahá’í worship, however exalted in its conception, however passionate in fervor, can never hope to achieve beyond the meagre and often transitory results produced by the contemplations of the ascetic or the communion of the passive worshiper. It cannot afford lasting satisfaction and benefit to the worshiper himself, much less to humanity in general, unless and until translated and transfused into that dynamic and disinterested service to the cause of humanity which it is the supreme privilege of the Dependencies of the Mashriqu’l-Adhkár to facilitate and promote.” 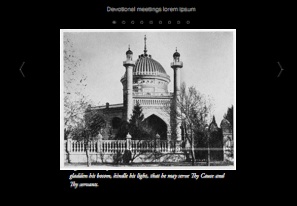 This presentation contains photographs of Bahá’í Houses of Worship around the world, together with some details of their design and construction.