The Shrine of the Báb on Mount Carmel in Haifa, Israel — one of the holiest places in the world for Bahá’ís.

The Báb – Herald of the Bahá’í Faith

The proclamation of the Báb’s message caused an upheaval in Persia even greater than the events that had surrounded the advent of Jesus Christ in the Holy Land almost two millennia before. From 1845 to 1847, a wave of passionate inquiry swept the country and countless congregations listened with wonder to the testimonies of the Báb’s followers. The principles, standards and laws they promoted challenged the whole structure of society. Inspired by His message, thousands upon thousands of people embraced His teachings and became known as Bábís.

Despite the fierce opposition they faced from authorities antagonized by fear and envy, the intense devotion that seized the Báb’s followers spread to members of the clergy, to the merchant classes and into higher circles of society. Among the most unexpected of those who embraced the Cause of the Báb was a brilliant theologian who bore the title of Vahid—meaning “unique”. A trusted advisor to the Shah, Vahid had been sent to interrogate the Báb on behalf of the king, who wished to secure reliable firsthand information about the movement that was sweeping his land. Upon learning of Vahid's conversion, the Shah called for the Báb to be brought immediately to Tehran. The Prime Minister—fearing that his own position might be fatally undermined should the Shah also fall under the Báb’s influence—ordered instead that He be imprisoned in the remote fortress of Mah-Ku, near the Turkish border. The excuse given to the Shah was that the Báb’s arrival in the capital might lead to great public distress and disorder.

The most distinguished personage to embrace the Cause of the Báb was the son of a wealthy minister. Mirza Husayn-‘Alí was a greatly revered, young nobleman who had renounced a position at the Shah’s court to tend to the oppressed and the poor. One day, Mulla Husayn—the first to recognize the Báb—arrived in Tehran on his Master’s instruction to seek out a prominent personage whom he had been told would be especially receptive to His message. 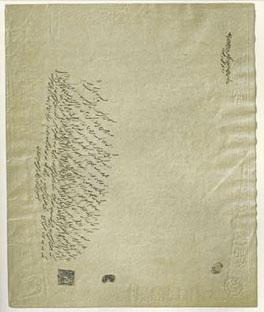 Facsimile of the Báb’s tablet addressed to “He Whom God shall make manifest” (Bahá’u’lláh).

The letter that Mirza Husayn-‘Alí received from the Báb evoked an immediate response. In it, He recognized the character of Divine Revelation. “Whoso believes in the Qur’an,” He declared, “and recognizes its Divine origin, and yet hesitates, though it be for a moment, to admit that these soul-stirring words are endowed with the same regenerating power, has most assuredly erred in his judgment and has strayed far from the path of justice.”

Although the two never met, the Báb was aware that Mirza Husayn-‘Alí—titled Bahá’u’lláh—was “He Whom God shall make manifest”, the Divine Educator whose advent the Báb was heralding.

While the Báb was imprisoned in the north of Iran, His Cause continued to spread throughout the country. In June 1848, a large group of His followers met in the village of Badasht. Their gathering would prove to be a defining moment in the movement’s history. There, they debated what their movement stood for, how to achieve their goals in the face of a rising tide of opposition and how to secure the Báb’s release. It was at Badasht that they realized that the Báb’s mission represented a sudden, complete and dramatic break with the religious and social traditions of the past.

Among those present was the poetess Tahirih. The conference was electrified by her explicit clarifications of the implications of the Báb’s message. He was, she announced, the long-awaited Manifestation of God, and the founder of a new and independent religious dispensation. To demonstrate this, she appeared on one occasion without the veil required by Muslim tradition. Her action proved to be a severe test of faith for some of the Bábís, and news of the event further aroused the antagonism of the Muslim clergy.

After Badasht, some 300 Bábís found themselves under siege in a small encampment, which they had hastily erected around an isolated shrine in the province of Mazindaran. Having enthusiastically marched through the province proclaiming that the Promised One had appeared, the group was denounced as heretical by the local clergy who aroused the population of several villages to attack them. The new prime minister ruled that the Bábís must be crushed and armed forces were dispatched to support the campaign of the local mullas.

The siege at the shrine of Shaykh Tabarsi was an unexpected humiliation for the opponents of the Báb. For several months, one army after another, numbering thousands of men, was sent to overcome the Bábís. These untrained, unequipped, “God-intoxicated” students defended themselves heroically against a coordinated army supported by the local population, blessed by the clergy and backed by the resources of the state.

Eventually, the Bábís, weakened by starvation and the loss of a large percentage of their members—including the Báb’s first disciple Mulla Husayn—were enticed to surrender under a solemn oath, taken on a copy of the Qur'an, that they would be freed. No sooner did they step out of the fortress, however, than they were set upon. Many were killed outright, others were captured and tortured to death, of those who survived, some were stripped of their possessions and sold into slavery.

Two other major locations witnessed similar scenes. In Nayriz and Zanjan, armed forces of the state came to the support of mobs that had been stirred into a state of frenzy. In Nayriz not even the leadership of a figure as preeminent as Vahid succeeded in calming the rage of the local authorities and the angry mob they incited. Vahid perished in the massacre that followed the capture of the small fort in which the beleaguered Bábís had taken refuge. At Nayriz, as at Tabarsi, the surrender of the Bábí defenders was secured by false pledges of peace and friendship signed and sealed on a copy of the Qur'an. Shortly thereafter the prisoners were slaughtered.

The Prime Minister Amir Kabir was determined to strike the uprising at its heart. The Báb was taken to Tabríz where leading scholars were asked to decide the case as a matter of religious rather than civil law. As the Prime Minister had anticipated, the clergy readily cooperated in signing a formal death warrant, based on a charge of heresy. The Báb was publicly executed in extraordinary circumstances at noon on 9 July 1850.

For the Bábís, the effect of the Báb’s execution, following so soon after the violent deaths of most of the Faith's prominent supporters, was a devastating blow. It deprived the community of the leadership it needed, not only to endure the intensifying persecutions it was experiencing, but also to maintain the integrity of the standards of behaviour taught by the Báb. 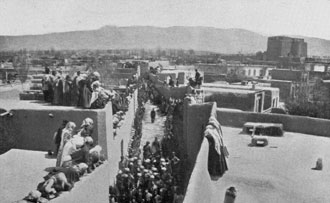 The Bábís had continuously emphasized that their sole concern was to proclaim the new spiritual and social teachings revealed by the Báb. At the same time, they believed that it was their duty to defend themselves and their families, provided they did not engage in acts of aggression. Once the guiding hands of those who understood the Báb’s message were withdrawn by such brutal repression, it was predictable that volatile elements among the Bábís might prove unable to maintain the original discipline.

This proved to be the case when on 15 August 1852, two Bábís fired a pistol at the Shah. The king escaped serious injury because the pistol was loaded only with birdshot; but the attempt on the monarch's life triggered a new wave of persecutions on a scale far surpassing anything the country had yet witnessed. Thousands of men, women and children were put to death in circumstances of horrible cruelty. Advised that the property of the "apostates" was forfeit, many local authorities joined in hunting down followers of the Báb. In Tehran the different trade guilds—bakers, butchers, carpenters and others—seized groups of Bábís and vied with each other to devise the cruellest forms of tortures.

Many historians and commentators—some of whom were eyewitnesses to events—have written about the persecution of the Báb’s followers, of the stirring deeds of valour which He inspired, and of His own charm and radiance.

The new wave of persecutions also emboldened those who wished to silence the resolute and ever more outspoken Tahirih. And yet, when advised that she had been condemned to death, Tahirih is reported to have said to her jailer: "You can kill me as soon as you like, but you cannot stop the emancipation of women."

The End of the Bábí Dispensation

For a brief period, the whole of Persia hovered on the brink of sweeping social change. That such transformation did not come about was the result of the intervention of religious and political leaders, who feared that the Báb would threaten the authority which their positions conferred upon them.

The boundless cruelty of these leaders left the followers of the Báb broken and exhausted, deprived of all resources and of the counsel of their leaders. But their sacrifices were not in vain. Unlike those seers of old who could but look to the far future for the time when "the earth shall be filled with the knowledge of the glory of the Lord," the Báb—by His very appearance—signified that the dawn of the "Day of God" had at last arrived, setting the stage for an even greater Revelation that was about to be released through Bahá’u’lláh.