Delegates and guests of a recent Bahá’í National Convention in Angola.

The Bahá’í Faith was first established in Angola in the 1950s. Since that time, increasing numbers of people throughout the country have been finding inspiration and guidance in the teachings of Bahá’u’lláh. Here, members of the Bahá’í community are working together with their neighbors and friends to promote and contribute to the well-being and progress of society. In urban centres and rural villages, in homes and schools, citizens of all backgrounds, classes and ages are participating in a dynamic pattern of life, taking part in activities which are, at once, spiritual, social and educational.

…the peoples of the world, of whatever race or religion, derive their inspiration from one heavenly Source, and are the subjects of one God. 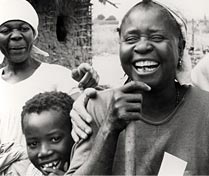 Many community building activities that address society’s needs in both their spiritual and material dimensions are underway in Angola. Among the principles that inspire them are the oneness of humanity, the need for universal education and the elimination of all forms of prejudice. In Angola, the Bahá’ís and their growing numbers of friends offer opportunities to study and reflect upon spiritual topics, arrange meetings for communal worship, and provide classes for children and youth, emphasizing moral education.