In order to guarantee that His Revelation would achieve its purpose of creating a united world—and to safeguard the unity of the Bahá’í community—Bahá’u’lláh appointed His eldest Son, ‘Abdu’l-Bahá, as the Centre of His Covenant and ordained the establishment of the Universal House of Justice. In turn, ‘Abdu’l-Bahá established principles for the operation of the Universal House of Justice and stated that after His passing, the Bahá’ís must turn to His eldest grandson, Shoghi Effendi, whom He named Guardian of the Bahá’í Faith. 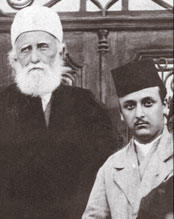 Both the Universal House of Justice and the Guardian were tasked with applying the principles, promulgating the laws, protecting the institutions, and adapting the Bahá’í Faith to the requirements of an ever-advancing society.

For 36 years, with extraordinary foresight, wisdom and devotion, Shoghi Effendi systematically nurtured the development, deepened the understanding, and strengthened the unity of the Bahá’í community, as it increasingly grew to reflect the diversity of the entire human race.

Under Shoghi Effendi’s direction, the unique system designed by Bahá’u’lláh for administering the affairs of the community evolved rapidly throughout the world. He translated the Bahá’í Scriptures into English, developed the Faith’s spiritual and administrative centre in the Holy Land, and, in the thousands of letters he penned, offered profound insights into the spiritual dimension of civilization and the dynamics of social change, unveiling an awe-inspiring vision of the future towards which humanity is moving.

All stand amazed at the vast range of his achievements and the character of his leadership, a leadership which evoked in a handful of ordinary people powers and capacities which they did not know they possessed…

This collection of pages explores the life of Shoghi Effendi and his work as Guardian of the Bahá’í Faith, guiding the followers of Bahá’u’lláh in their efforts to expand and consolidate the Bahá’í community. The articles and resources section includes historical background and examples of his prodigious literary skill.